How to Capture And Manage Screenshots on macOS

The screen capture feature, called a screenshot, is very handy when you need to capture the screen of your Mac to show the content on it to others. By making a screenshot, you get a good quality digital image of your Mac's display. Depending on the key combination, you can make a whole display screenshot or choose a region of your screen to capture. Nowadays, all smart devices like computers and smartphones have a built-in screen capture function, so you don't need to worry about installing a third-party screen capture app.

The first screenshots were created around the 1660s with the first interactive computers. Tough the screenshots were not the same as they are now. Back then, computers did not universally have built-in functionality for capturing screenshots, and the screen capture function would only capture the content of the screen but not the appearance.

The possibility to make screenshots of an active application window began with the Mac OS X Panther. The cursor would turn into a small camera icon by pressing Command + Shift + 4 + Spacebar, and the window under the cursor would be highlighted. Then the click on the mouse or trackpad would capture the screenshot of the highlighted element. 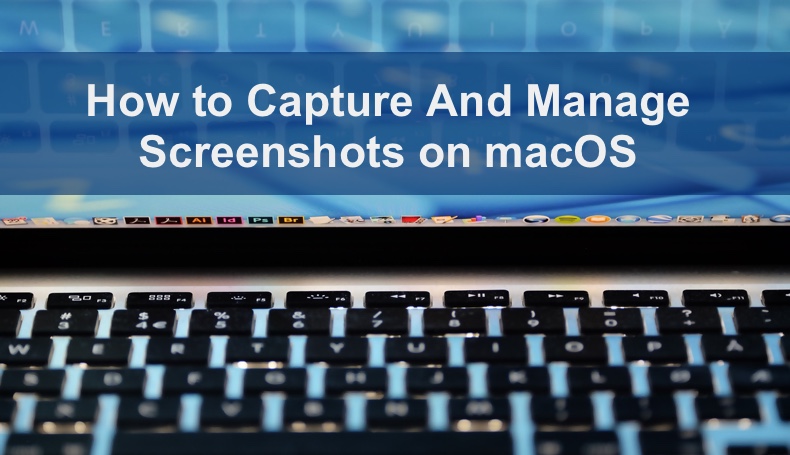 An application called Grab (a program in macOS with the purpose of taking screenshots of a selected area of the screen, a whole window, an entire screen, and make timed screenshots) would make a screenshot and pop it up in a window for you to copy to the clipboard or save it as a TIFF (Tag Image File Format). An alternative app that is integrated into Mac's operating system as well as Grab called Preview has the same capture options, but it opens the screenshot immediately in a new window.

With the 10.14 Mojave operating system, users got a revamped screenshot utility called the Screenshot app (previously known as Grab). This utility toolbar shows up when you press Command + Shift + 5 keys on your keyboard, and it allows you to choose options to take screenshots and capture modes. With this application, you can change where the taken screenshot is saved. You can also record your Mac's screen in full-size of the chosen region.

You can also capture screenshots and save them to files using a shell utility called "screencapture" in the Terminal app or shell scripts. You cannot take screenshots while the DVD Player is running.

When you take a screenshot, your Mac, by default, will save it in PNG (Portable Network Graphics) format as it can retain the quality of the created image. The downside is that the PNG format images tend to be large. Sometimes it might be more convenient to use a format that takes less storage space, for example, like a JPEG (Joint Photographic Experts Group) format.

Below you will find detailed steps on how to change screenshot format, change the default location, disable screenshot thumbnail preview, and more.

Four Ways You Can Take Screenshots

There are four ways you take screenshots. You can take a screenshot of the entire screen, a selected area, an open window and by using screenshot tools.

To capture the entire screen of your Mac, simultaneously press Command + Shift + 3 keys on your keyboard.

Screenshot a Selected Area of The Screen

1. To capture a chosen area of the screen, simultaneously press Command + Shift + 4 keys on your keyboard.
2. When you see your mouse cursor change to a crosshair, release the keys and select an area on your screen that you want to capture. 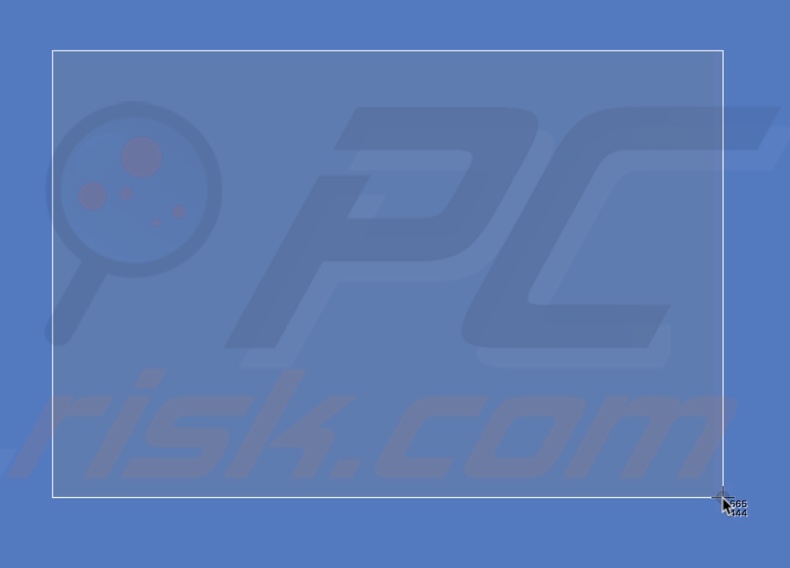 1. You can screenshot an open window by simultaneously pressing Command + Shift + 4 keys on your keyboard.
2. Let go of the keys when you see your mouse cursor change to the crosshair and then press the Space bar once.
3. When you see a camera icon, hover over a screen that you want to capture and click on it.

Using this screen capture method, you can screenshot even the Dock or the upper menu bar.

If you don't want to remember all the above options and you think it's a hassle, you can always use the screenshot tools. You can do all of the above-mentioned options with it. To open screenshot tools, simultaneously press Command + Shift + 5 on your keyboard. Choose what you want to screenshot and click on "Capture". 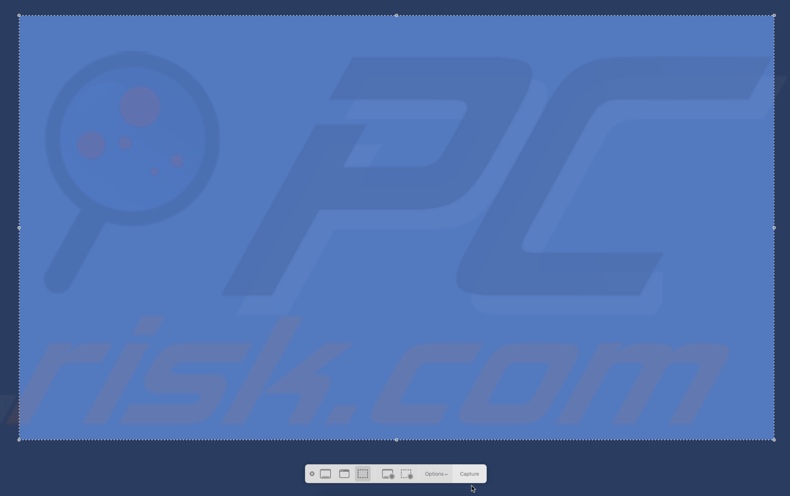 You can also use screenshot tools with the Screenshot app:

1. Open Finder.
2. Go to "Applications".
3. Scroll down until you see the Utilities folder. Click on it.
4. Find and click on "Screenshot". 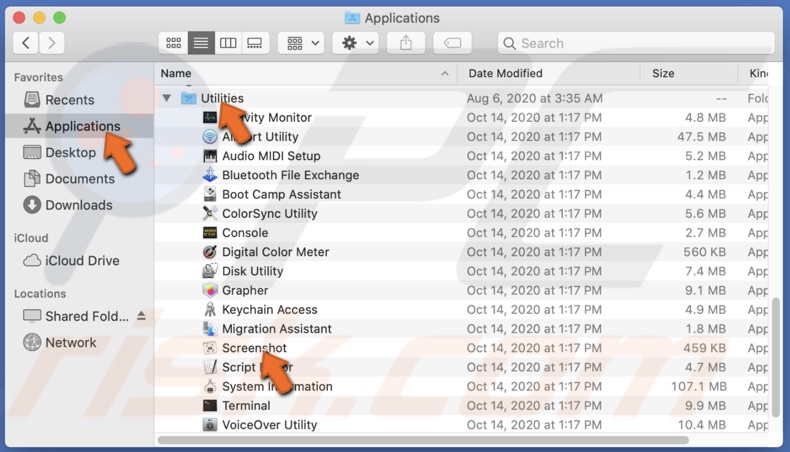 As mentioned above, when you take a screenshot, it is automatically saved as a PNG image. To change the screenshots' default format, choose a format you want to change to and follow the steps.

Change the format to JPEG: 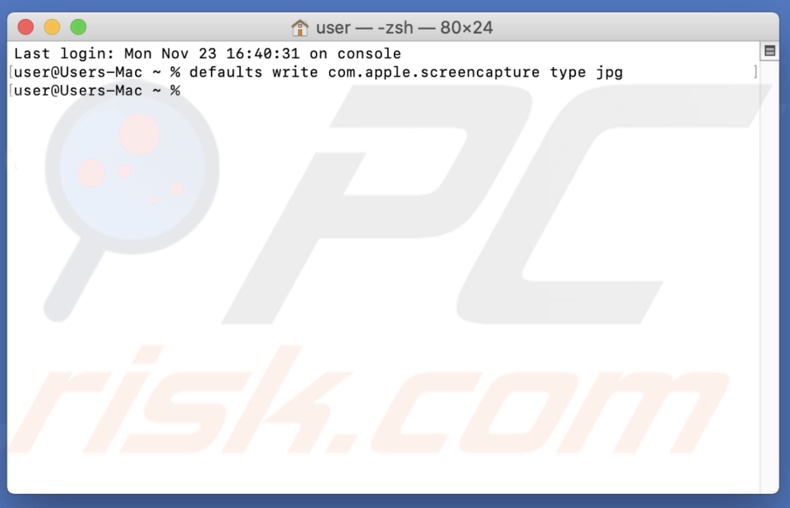 Change the format to TIFF: 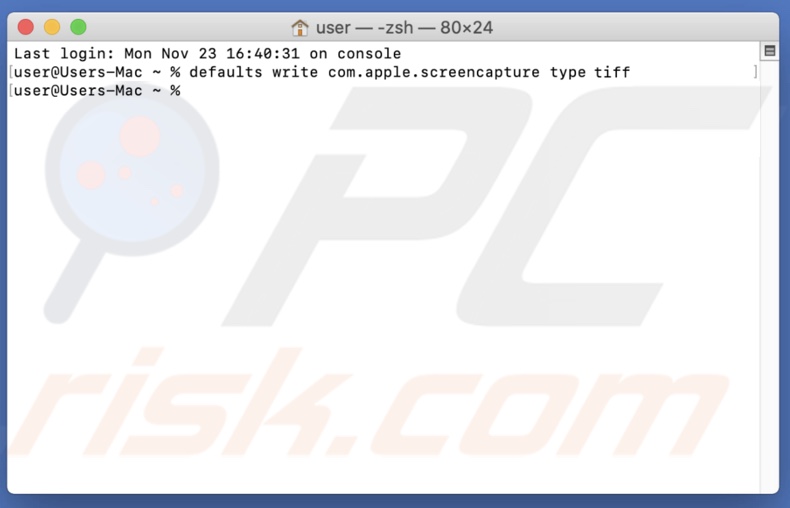 Change the format to PDF: 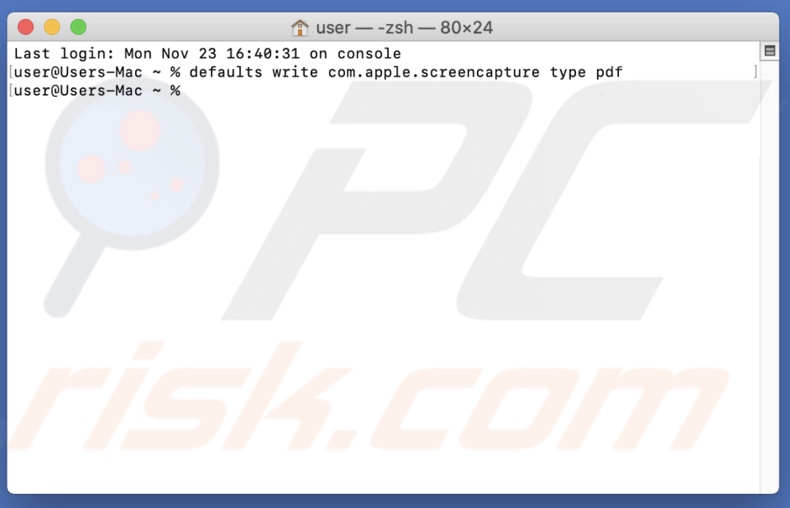 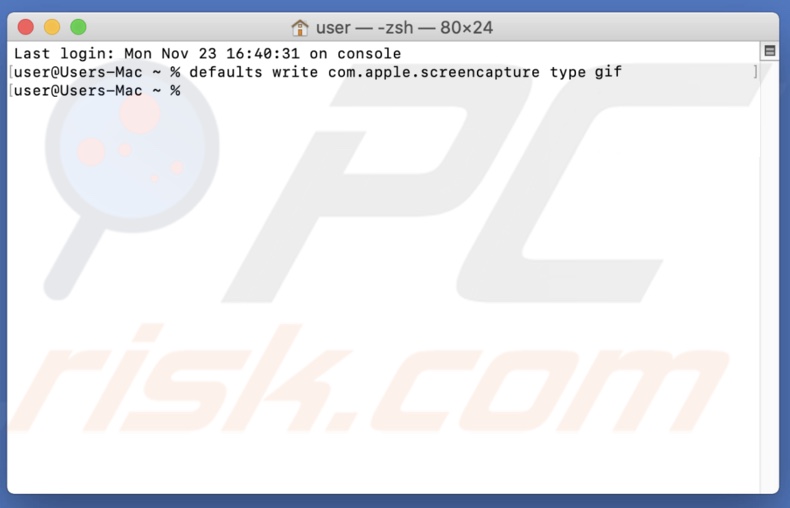 Change the format back to PNG: 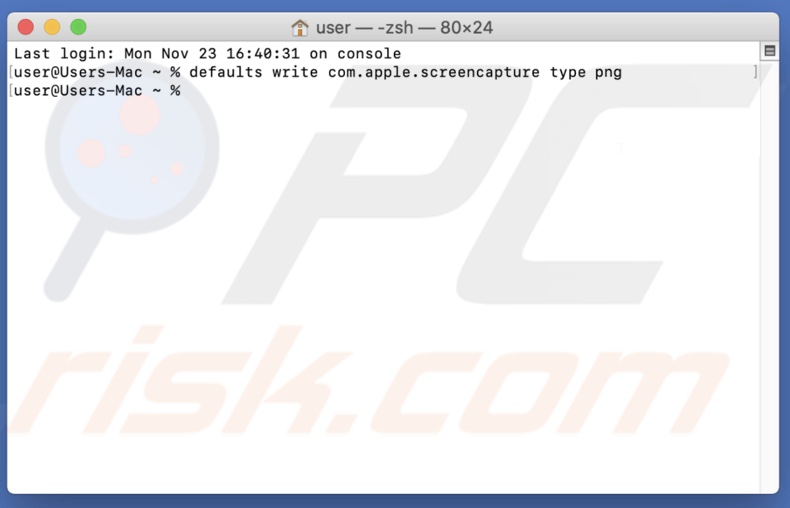 How to Change The Default Location of a Screenshot

The default location of a screenshot is your Mac's desktop, but you can always change that by following the steps below: 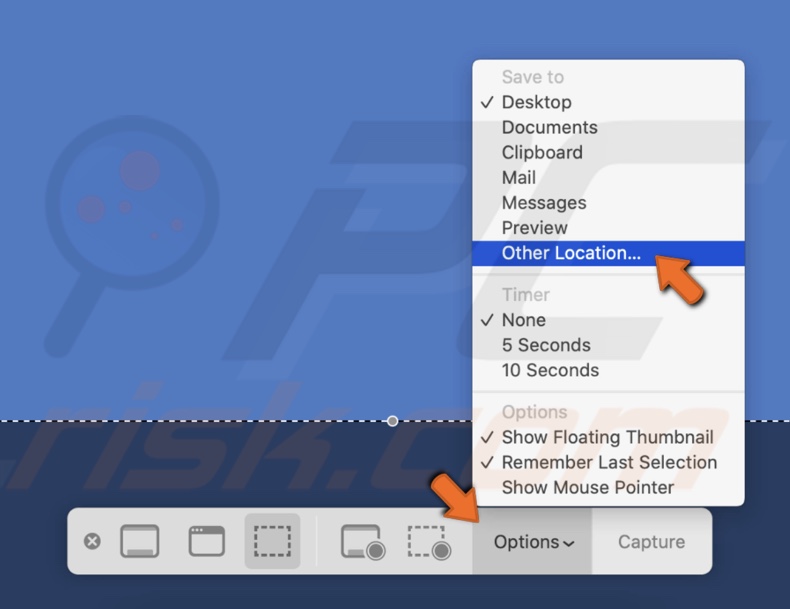 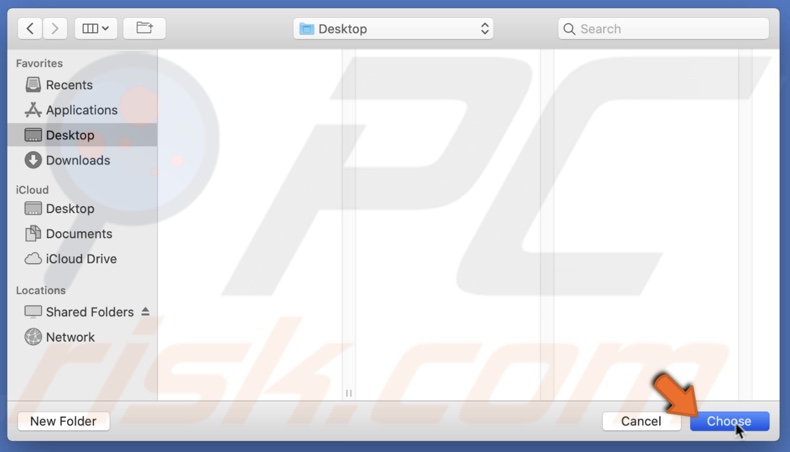 How to Save Screenshots to Clipboard

Always save screenshots to the clipboard: 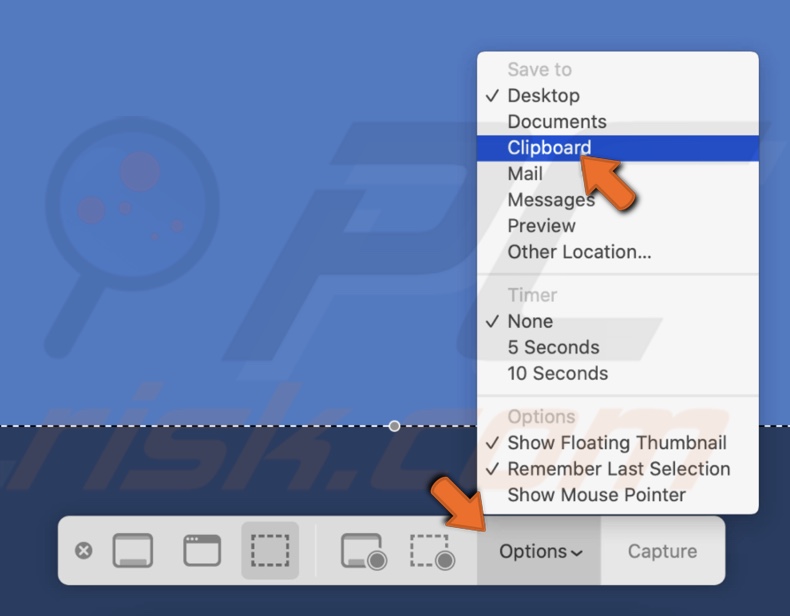 Your screenshots will be saved to the clipboard until you change the location.

Momentarily save screenshots to the clipboard:

How to Disable Screenshot Thumbnail Preview

If you have a newer Mac, a thumbnail of the screenshot appears whenever you take a screenshot at the bottom right corner.  If you click on it, you can start to edit the screenshot or send it via AirDrop or other ways. But to some, that can sometimes be annoying. Follow the steps below to disable it.

1. Simultaneously press Command + Shift + 5 on your keyboard.
2. In the bottom menu bar, click on "Options".
3. Under "Options", find and click on "Show Floating Thumbnail". 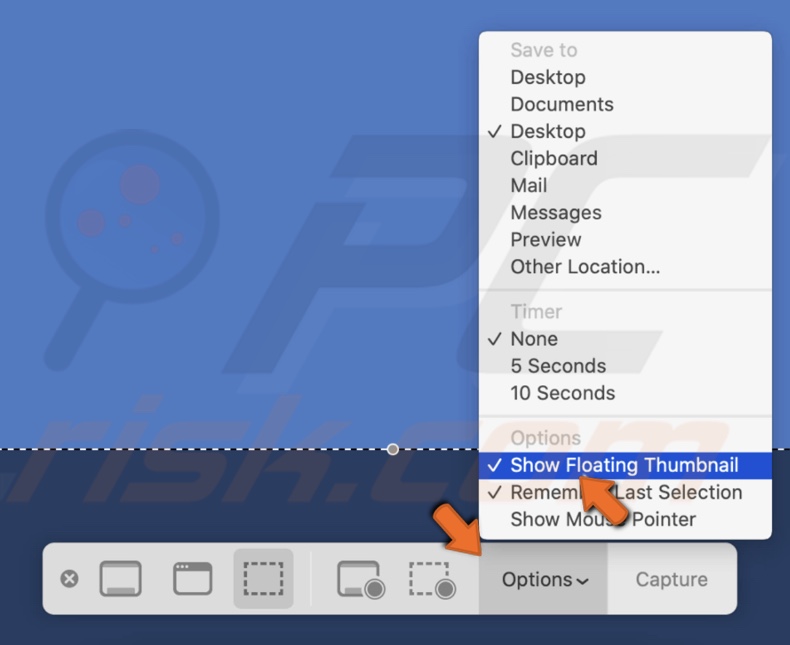 Now you will not see the thumbnail appear every time you take a screenshot.

How to Change Screenshot Keyboard Shortcut

If the default keyboard shortcuts for taking a screenshot are inconvenient for you, you can always change the keys in the Mac settings. 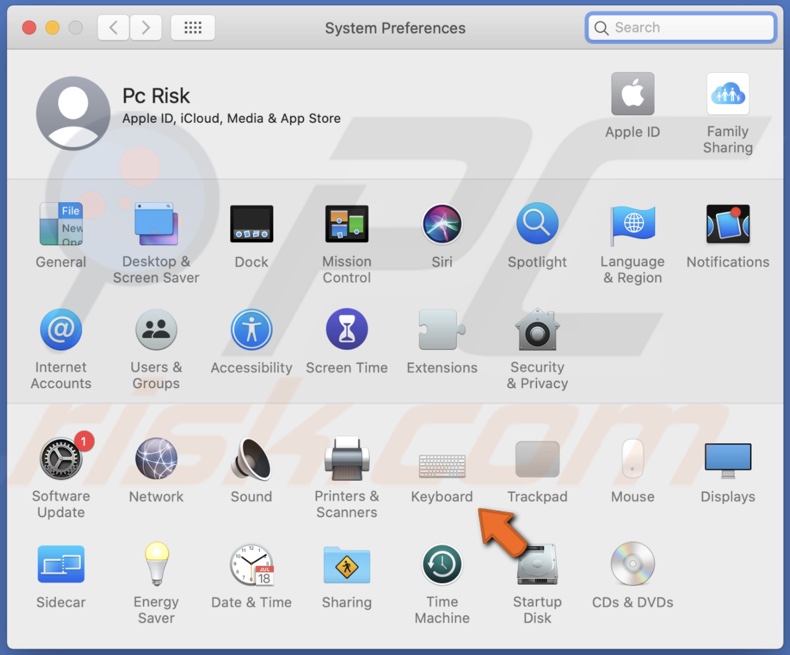 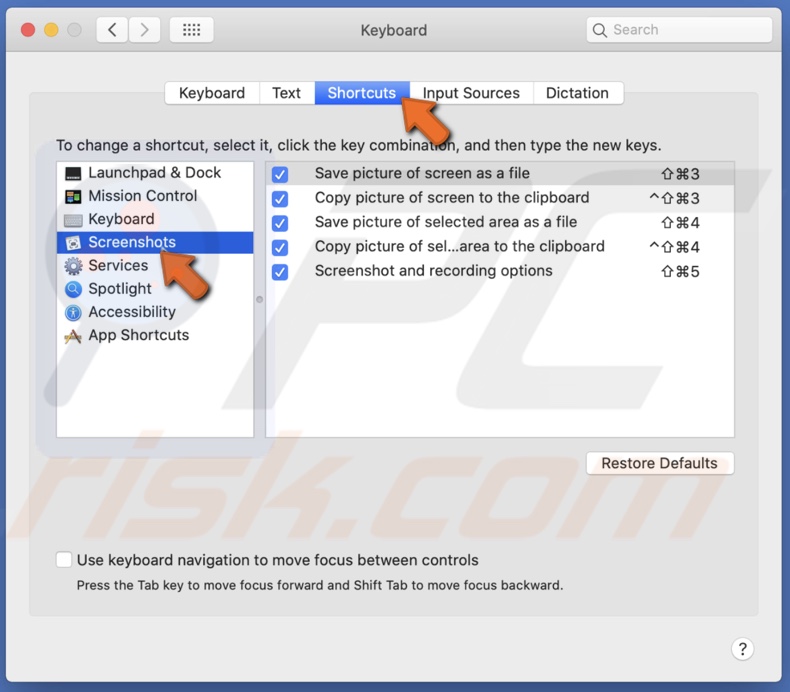 7. Then simultaneously press the key combination on your keyboard that you want to change to.

We hope you found this information useful. Let us know in the comments if you have any questions!

Video on How to Capture And Manage Screenshots on macOS