"Your device has been blocked" - How to Remove Ransomware Infections From an Android Device?

Cybercriminals have been spreading ransomware viruses on Windows-based computers for some time. These infections became popular in mid-2006 and continue to infect personal computers and extort money from their victims.

In most cases, cybercriminals employ the Green Dot MoneyPak, Ukash, or PaySafeCard pre-paid card services to collect fake fines from unsuspecting mobile device users. Tablet and mobile phone users should be aware that paying these fines as ordered by these messages is equivalent to sending their money to cybercriminals.

Note that neither the FBI nor any other authority use screen lockers to collect any fines. 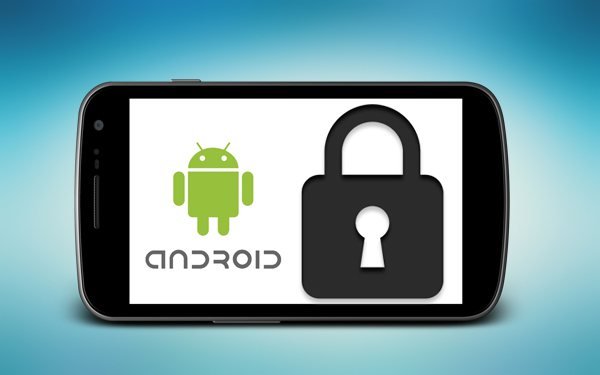 Ransomware infections have become a profitable business for cybercriminals who continue to search for various ways of infecting mobile devices worldwide. At the time of writing, some ransomware viruses were targeting Android devices - all using rogue applications to lock tablet or phone screens. 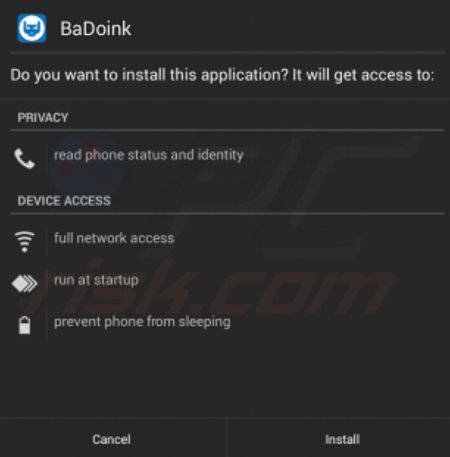 Other known variants of this ransomware are proliferated using text message spam. An infected mobile device sends an SMS message to all contacts in the address book ("Someone made a profile named 'contact's name' and he uploaded some of your photos! is that you?") followed by a link leading to a Dropbox page. 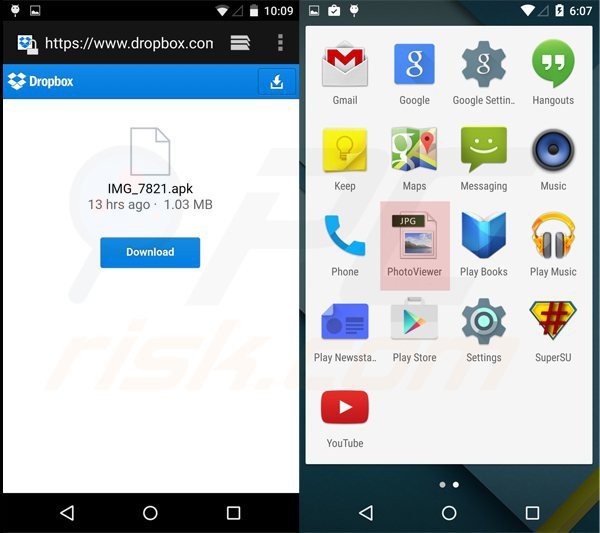 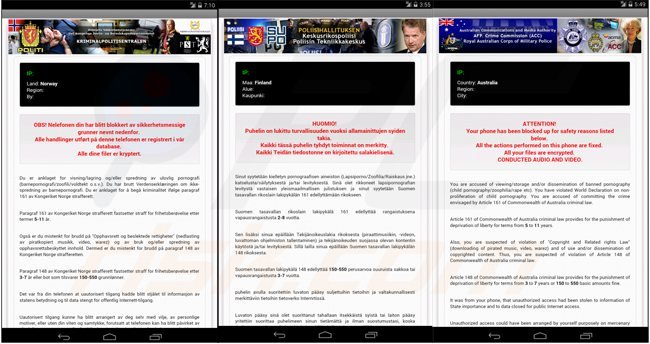 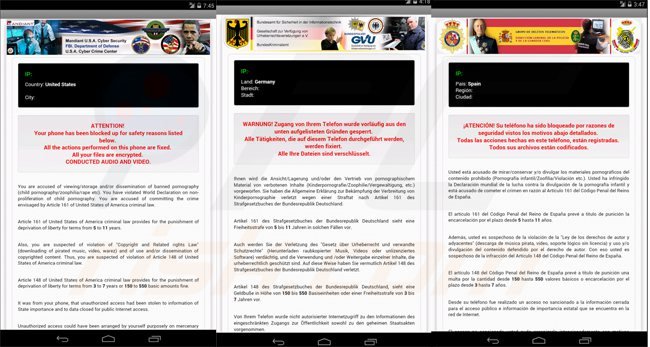 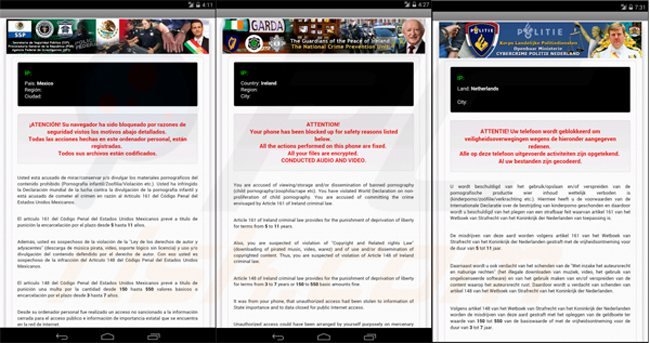 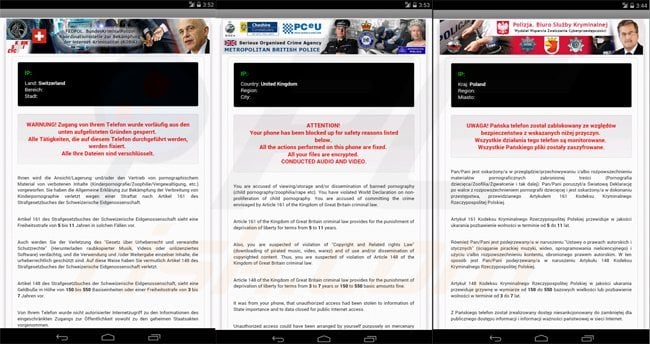 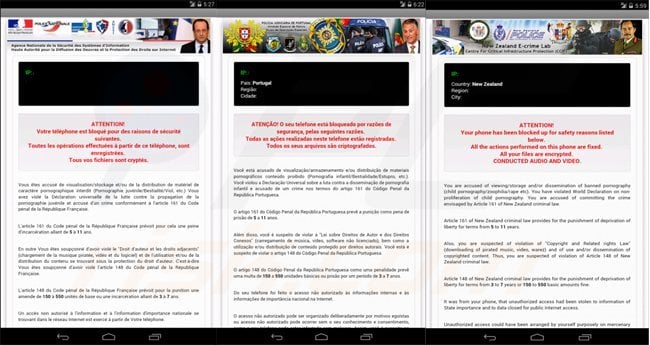 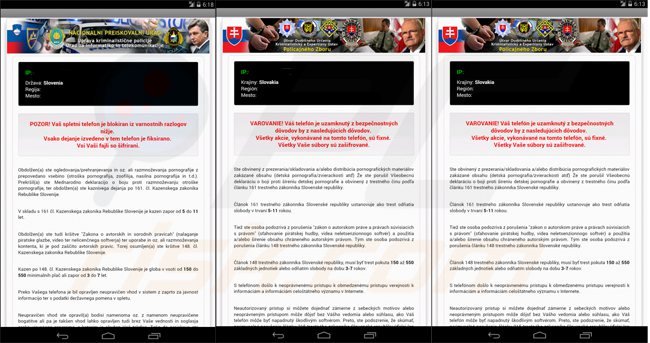 ATTENTION! Your phone has been blocked up for safety reasons listed below. All the actions performed on this phone are fixed. All your files are encrypted. CONDUCTED AUDIO AND VIDEO. You are accused of viewing/storage and/or dissemination of banned pornography (child pornography/zoophilia/rape etc.) You have violated World Declaration on non-proliferation of child pornography. You are accused of committing the crime envisaged by Article 161 of United States of America criminal law. The penalty set must be paid in course of 48 hours as of the breach. On expiration of the term, 48 hours that follow will be used for automatic collection of data on yourself and your misconduct, and criminal case will be opened against you. Amount of fine is 300$. You can settle the fine with MoneyPak xress Packet vouchers. As soon as the money arrives to the Treasury account, your phone will be unblocked and all information will be decrypted in course of 24 hours.

Users who install this fake app are presented with a ransom-demanding notification (false accusations of viewing child pornography). 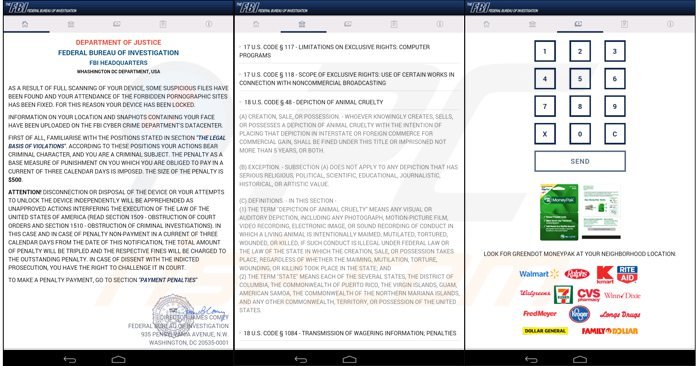 As a result of full scanning of your device, some suspicious files have been found and your attendance of the forbidden pornographic sites has been fixed. For this reason your device has been locked. Information on your location and snapshots containing your face have been uploaded on the FBI Cyber Crime Department’s data center. First of all, familiarize with the positions stated in the section “The Legal Basis of Violations”. According to these positions your actions bear criminal character, and you are a criminal subject. The penalty as a base measure of punishment on you which you are obliged to pay in a current of three calendar days is opposed. The size of the penalty is $500

Attention! Disconnection of disposal of the device or your attempts to unlock the device independently will be apprehended as unapproved actions interfering the execution of the law of the United States of America (read section 1509 - obstruction of court orders and section 1510 - obstruction of criminal investigations). In this case and in case of penalty non-payment in a current of tree calendar days from the date of this notification, the total amount of penalty will be tripled and the respective fines will be charged to the outstanding penalty. In case of dissent with the indicted prosecution, you have the right to challenge it in court. To make a penalty payment, go to section “Payment Penalties”.

After gaining administrator privileges, this ransomware presents its victims with a fake message which supposedly was sent by the FBI demanding to pay a fine of $500 for watching forbidden pornographic sites. Moreover, it changes the PIN lock of the compromised device. To remove the PIN lock, users should reset their devices to factory defaults. 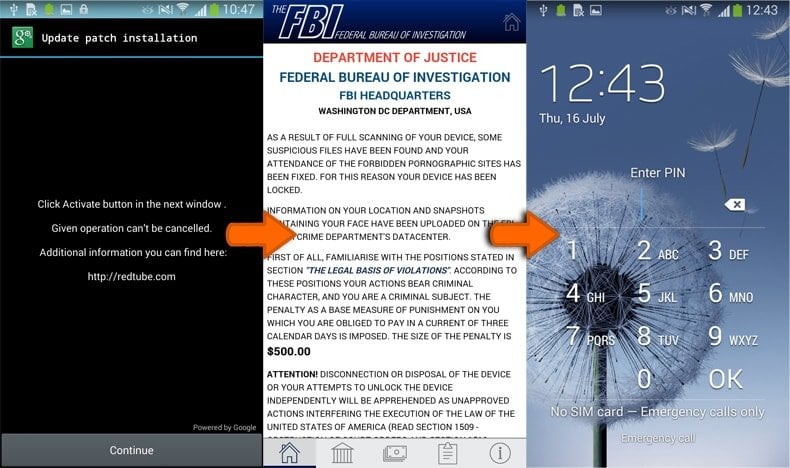 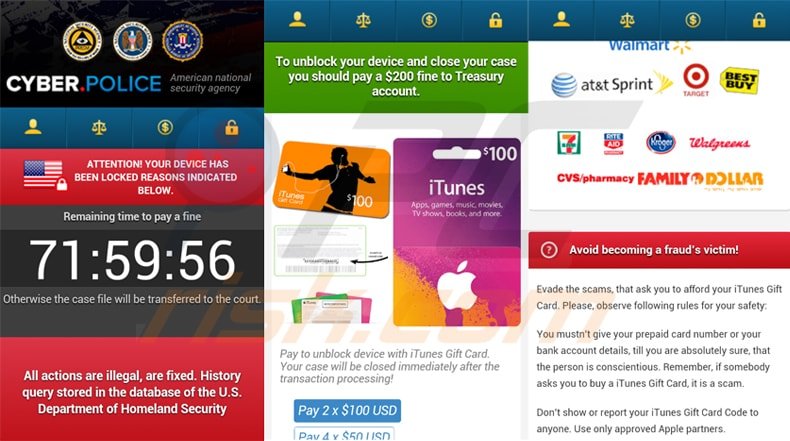 Text presented in this ransomware:

ATTENTION! YOUR DEVICE HAS BEEN LOCKED REASONS INDICATED BELOW. Remaining time to pay a fine. Otherwise the case file will be transferred to the court. All actions are illegal, are fixed. History query stored in the database of the U.S. Department of Homeland Security. To unblock your device and close your case you should pay a $200 file to Treasury account. Pay to unblock device with iTunes Gift Card. Your case will be closed immediately after the transaction processing! Avoid becoming a fraud’s victim! Evade the scams, that ask you to afford you iTunes Gift Card. Please, observe following rules for your safety: You mustn’t give your prepaid card number or your bank account details, till you are absolutely sure, that the person is conscientious. Remember, if somebody asks you to buy a iTunes Gift Card, it is a scam. Don;t show or report your iTunes Gift Card Code to anyone. Use only approved Apple partners.

Here are some screenshots of Android ransomware targeted at users from Russia:

How to Remove "Your device has been blocked" Ransomware from an Android Tablet or Phone?

Ransomware notifications (that are impossible to close) are loaded from third-party rogue applications. For example, BaDoink, VideoViewer, VideoPlayer, Network Driver System, Video Render, and PornDroid, among many others.

To eliminate the screen-blocking message, you must uninstall the rogue application which causes it.

1. Hold down the power button on your device.

2. In the opened notification window, long-press the "Power off" option. 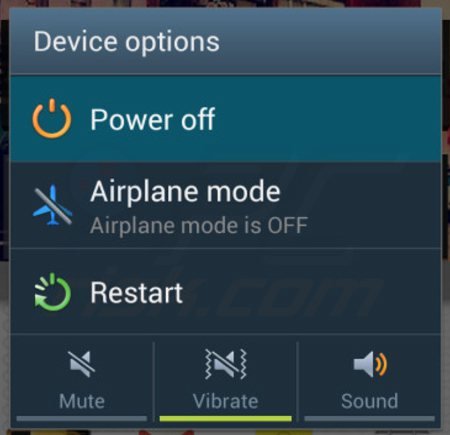 3. In the opened window, confirm that you wish to boot into Safe Mode by tapping "OK." 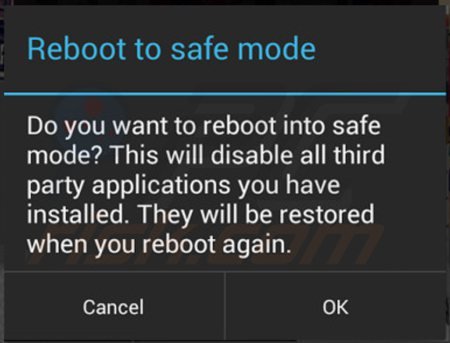 4. When your phone or tablet reboots, you should see a "Safe Mode" watermark (at the bottom of the screen). Go to your device Settings menu, tap "Apps" or "Application manager."

Touch the application you wish to uninstall (which causes the rogue ransom-demanding message to appear on your device, for example, PornDroid).

Some newer Android devices boot into Safe Mode by simultaneously holding the volume up and volume down button when restarting.

To protect your Android device from these ransomware infections, disallow third-party application installation. Go to "Settings," select "Security," scroll down, and uncheck the "Unkown sources" box.