How to open and edit the hosts file on Mac computers?

All Mac computers store a small, text based file called 'hosts'. Modifying this file is sometimes necessary to solve connection problems, set your own web server, and instruct the system to block access to specific websites (thus to prevent opening malicious websites). There are many reasons why you might need modify this particular file, however, access to it is not generally via the desktop folder. The most common way to make changes to the host file is using the Terminal application. This works on all Mac operating system versions, although the path sometimes varies.

In the new version of macOS, you can also modify the hosts file via Finder and the text editor. Making changes to the hosts file may seem daunting but with a proper guidance it is straightforward and useful to perform certain operations. Despite this, in some cases users are unable to differentiate between the DNS server and hosts file. To clarify, we will describe the differences and provide methods to modify the hosts file depending on your Mac operating system version. 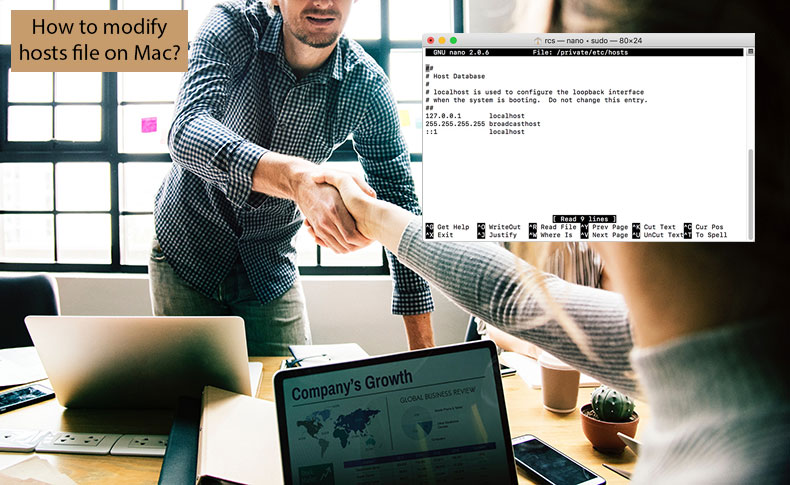 What is the difference between DNS and hosts file?

A DNS server is a database that responds to websites URL addresses expressed in more meaningful characters. These servers finds the correct IP address assigned to the particular URL address and allow you to access the desired website. They also create a hidden cache file where this information is stored, thus increasing loading speed when you try to access a website that you have previously visited.

The hosts file is one of the easiest ways to modify or deny DNS server entries. It can be useful to test a web server under development, so that you can access it through a URL address, rather than its IP address. Within the hosts file, you can associate a particular IP address and Domain name (i.e. URL address). The Mac will open the IP address assigned to a particular URL address within the hosts file, ignoring the DNS server results. This is also an effective way to block unwanted websites. For example, if you are setting-up a new company computer and wish to prevent employees from accessing unnecessary websites (such as Facebook, Twitter, etc.), you simply assign invalid or other preferred addresses to these website URL addresses. As a further example, you can assign the invalid IP address 0.0.0.0 and URL www.facebook.com within the Mac host file - the computer will attempt to connect to the invalid IP addresses when the Facebook URL is entered. You can also assign your company homepage IP address, rather than an invalid IP. More detailed information about how to prevent Mac from accessing unwanted websites can be found in this article.

If you do not know the full IP address of a specific website, you can use Terminal and the command ping. Launch terminal via Spotlight, press the keyboard shortcut of Command and Spacebar, and type in Terminal. Type in the ping command with the URL address and press return. Within the results, you will find the website IP address. The example of the ping command listed below is: ping www.pcrisk.com

On modern versions of the Mac operating system, the hosts file might be accessible and modified in two separate ways. First, via Finder - by moving the file to your desktop or another unprotected are. Second, via the Terminal application. We begin with hosts file editing via Finder. Launch finder and click the Go option in the menu bar at top of your screen. Then select Go to Folder and type the following path and click Go: 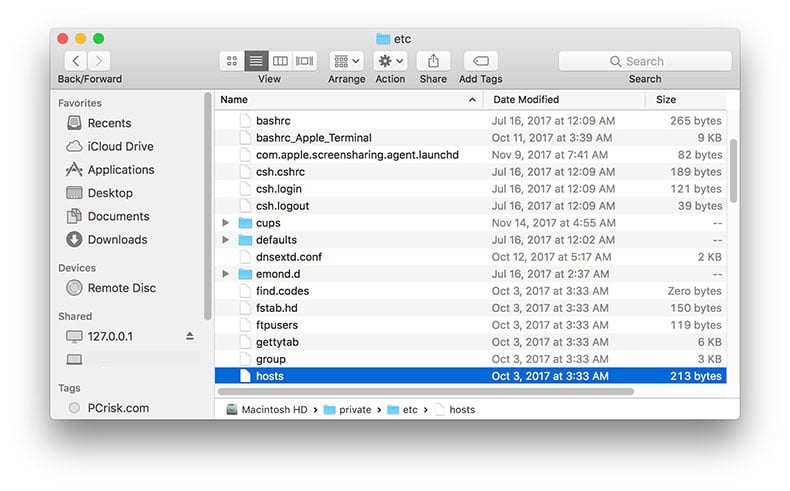 By default, the "etc" folder is protected against modification. Therefore, copy the hosts file to an unprotected location, for example, the desktop. There you will be able to modify the copy of the hosts file. Simply double click on the file to open it via the TextEdit application (or any other application able to open and modify text-based files).

At the top of the opened file, you will find comments (denoted by the hash [#] symbol). Anything placed on the same line that starts with this symbol is ignored by the system. In this way, comments and descriptions can be added to the file. Below the comment lines are the default IP addresses for localhost and broadcasthost. There might be other data, which is added by various applications. Enter your additional information below all existing entries. A common reason to modify the hosts file might be to block an unwanted websites from loading on your computer. Once you have finished editing, you must replace the original hosts file with this newly created version. Therefore, repeat the above procedure and go to the "etc" folder. 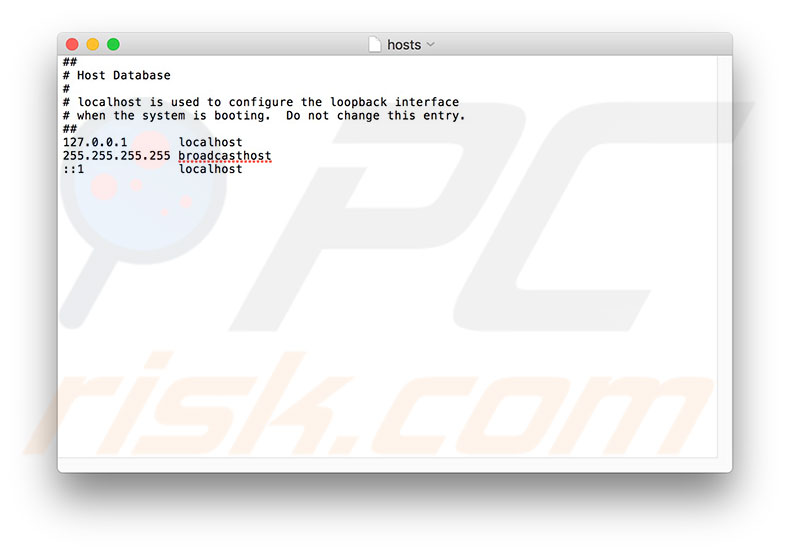 Click the Go option in the menu bar at the top of the screen, select Go to Folder and type in the following path: /private/etc/hosts Click Go. Move the modified file to replace the old one. The operating system will ask you to authenticate to make changes within the protected folder. Click authenticate. You will now be asked to choose the action you wish to perform. Click Replace. Finally, you must enter the administrators account password to confirm your action. If you have blocked websites that already have been visited by this computer, you will need to flush DNS cache - detailed information can be found in this article.

Modifying the hosts file via Terminal can save time spent moving the hosts file in and out of the protected "etc" folder. In this case, however, you must work with the keyboard, rather than mouse or touchpad/trackpad. Using Terminal saves time spent moving the hosts file because you will be editing the original hosts file with super user permissions. Therefore, you are advised to create a backup of the hosts file, especially if you do not have experience of these techniques. Launch Terminal using Spotlight. Press the keyboard shortcut of Command and Spacebar. Type in Terminal and press Return. Alternatively, visit the Utilities folder under Applications via Finder to launch this built-in command line application.

Once Terminal is launched, type following command and press Return:

To restore the hosts file, use the following command and press Return to execute: 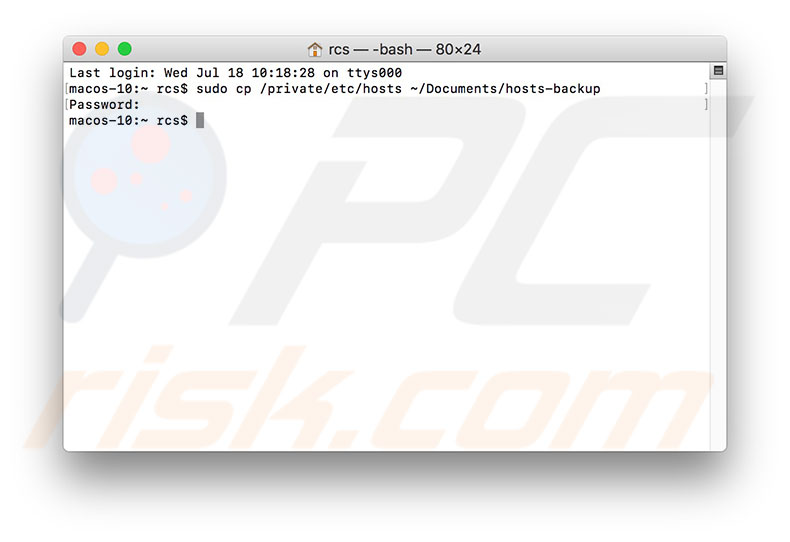 Type the following command to access the hosts file by using a Unix text editor called nano. Press Return to execute the command. You will be asked to enter the administrators password to confirm access to super user permissions.

Bear in mind that Terminal will not display any characters when you are entering the password. Simply type the password and press Return. The Terminal window will change. At the top, you will see the path of the hosts file, content, and control commands at the bottom of window. To navigate while using nano, use your keyboard arrow keys. Leave all existing information unchanged and type your additional data below (adding your data before the existing information could result in the application failing). 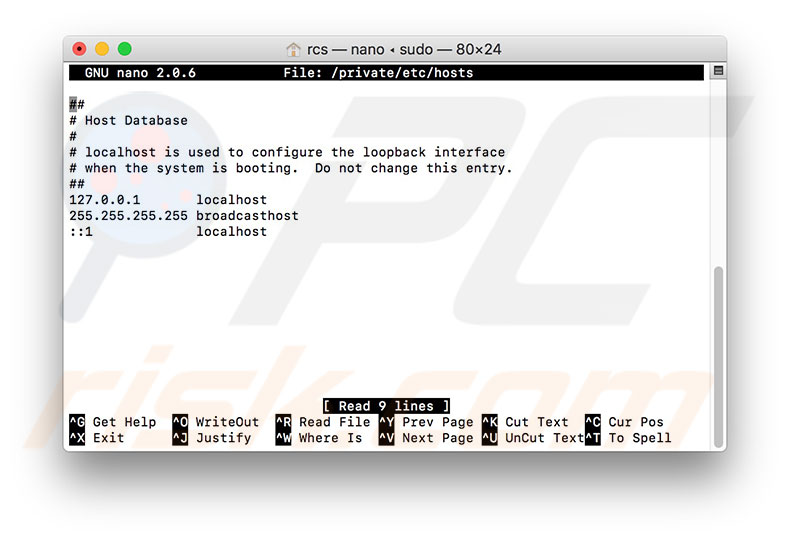 Enter your data, each on a new line. Once you have finished editing the hosts file, press the keyboard shortcut of Control and O and then press Return to save changes within the existing file. Then press the shortcut of Control and X to exit the nano editor. For the changes to take effect, you will need to flush the DNS cache - detailed instructions can be found in this article.

Video Showing how to modify hosts file on Mac